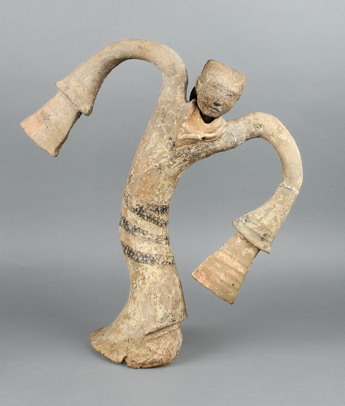 San Francisco, CA — Like the Roman Empire, China’s Han dynasty (206 BC–220 AD) forged one of the most powerful, advanced civilizations of the ancient world, and its elite had it all: unbridled luxury, technical innovations and courtly romance. On Feb. 17, 2017 the Asian Art Museum unveils Tomb Treasures: New Discoveries from China’s Han Dynasty, an original exhibition of more than 100 dazzling works recently unearthed from the coastal heartland of classical Chinese culture.

Never before seen in the United States, these outstandingly crafted royal burial goods survived over 2,000 years underground. Together, they reveal how the early Han courts sought to glorify their statures in this life and in the next one: by creating delicate jade body suits sewn with gold threads, exquisitely decorated coffins, ingenious “smokeless” lamps, silver and bronze banquet utensils and ritual bell sets that still ring.

“In addition to luxuries, royals surrounded themselves with domestic wares that surprise us with their intimate portrait of private life during the Han dynasty,” says the museum’s newly appointed curator for Chinese art, Fan Zhang. “We have everything from a large silver basin for taking baths, to a working stone latrine with an armrest, to a boldly designed ceramic urinal — we even have two hollow bronze phalluses that could be used.”

Tomb Treasures exposes the lifestyles and private pleasures of the Han nobility. Coming four years after the wildly popular Terracotta Warriors exhibition at the Asian Art Museum, Tomb Treasures features even newer finds from Jiangsu province, near present-day Shanghai, telling a rich story of early China through these rare artworks and artifacts. The exhibition will be organized into three thematic areas:

“This exhibition underscores how connected we really are to the past, that we share the same passions across time and culture,” says museum director and exhibition co-curator Jay Xu. “These tomb treasures show how the Han people’s ambitions relate to our own pursuit of comfort and security today. The search for longevity, the craving for immortality, the yearning for a joyful life and a satisfying afterlife — is it the sweetness of this world that inspires our hopes for the next?”

A public Opening Party on February 16, themed “In the Afterlife” will kick off Tomb Treasures with music, live performances and dancing. This evening party will also inaugurate the museum’s popular 2017 Thursday Night Programs season, which takes place from mid-February to late-September.

Tomb Treasures: New Discoveries from China’s Han Dynasty is organized by the Asian Art Museum of San Francisco and the Nanjing Museum. Presentation is made possible with the generous support of The Bernard Osher Foundation, The Akiko Yamazaki and Jerry Yang Fund for Excellence in Exhibitions and Presentations, Warren Felson and Lucy Sun, Angela and Gwong-Yih Lee, Fred Levin and Nancy Livingston, The Shenson Foundation, in memory of Ben and A. Jess Shenson, Hok Pui Leung and Sally Yu Leung, and Sampson C. and Faye Shen Fund.

About the Asian Art Museum

The Asian Art Museum–Chong-Moon Lee Center for Asian Art and Culture is one of San Francisco’s premier arts institutions and home to a world-renowned collection of more than 18,000 Asian art treasures from throughout Asia spanning 6,000 years of history. Through rich art experiences, centered on historic and contemporary artworks, the Asian Art Museum unlocks the past for visitors, bringing it to life while serving as a catalyst for new art, new creativity and new thinking.