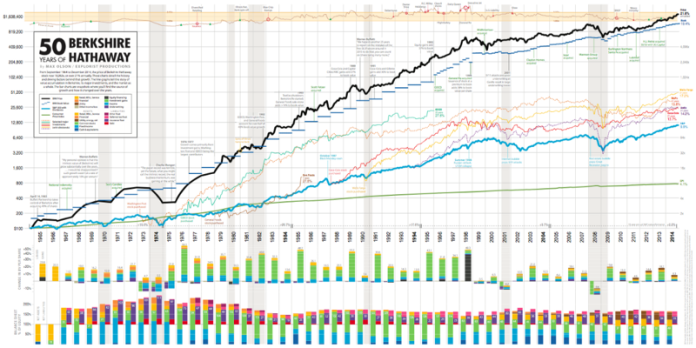 The third-best business advice I ever received was from Warren Buffett and Charlie Munger who shared remarkably similar responses to my question. Yet each offered a distinctive perspective that helped me better assimilate the information and make it actionable.

While attending Berkshire’s 2015 Annual Meeting celebrating their 50th Anniversary, I was fortunate enough to ask Warren and Charlie a question during their infamous Q&A sessions.

Up to this point, I’d read and reread Berkshire’s annual letters from 1964–2014. I’d watched countless hours of YouTube interviews with Warren covering a wide range of topics from incentive programs for management to his endorsement of current Democratic presidential front-runner, Hillary Clinton. Warren is one of my heroes…super-hero may even be more apt.

I approached the microphone to deliver a tightly-crafted over-rehearsed question for the sages of investing. I was so focused on getting my message across with clarity and impact that I forgot to mention my name.

In this year’s annual letter, Charlie wrote about the peculiar attributes that have made the Berkshire System (and the leader of the system) a historically significant organizing entity.

Warren and Charlie, what practical mental model or models would you impress upon a young enterprising individual to build an important and enduring enterprise of peculiar distinction and impact?

I am specifically alluding to why some models produce lollapalooza performance and others more modest. For instance, the reasons why Microsoft was able to create a new industry and incredible economic wealth, whereas See’s Candy, albeit a phenomenal generator of cash flow and returns for reinvestment, went on to create substantially less impact.

Warren looked over at Charlie and said, “Well, you wrote the thing.” The stadium of 40,000 vibrated with laughter.

Listening carefully, I furiously jotted down every word that was uttered to the best of my ability. Here I’ll paraphrase what they said:

“You get the reputation you deserve.”

A company, like a person, builds a reputation over time. In Berkshire’s case, it took a “very long time.” And even though you set out to build a “powerhouse brand” there’s no guarantee you’ll create a powerhouse brand.

Warren offered this distinction: You can also “inherit” a reputation like Charles Lindberg. (the pilot who flew the first solo flight across the Atlantic and instantly became world-famous).

A reputation happens over time. Acquire one slowly and get the best reputation you can — it’s a wise investment.

Charlie closed with, “Behaving well is most important” and if you have a 1 in 50 chance to build a powerhouse brand, you most likely won’t.

Some may find this advice aloof, vague, and over-simplified. Some may expect percentage allocation formulas, step-by-step action plans, or an investment idea. Yet I was riveted by these old-fashioned principles explained simply. This was instructive insight, a North Star by which one could guide their own creativity and strategic flexibility to navigate the murky waters of industry with a clear-eyed mental model.

The reputation you get is usually the one you deserve.

1. You gain a reputation through your long-term behavior.

2. Some inherit a good reputation by accomplishing something never done before.

Bill Gates and Charles Lindberg are instructive examples of the latter. Warren Buffet, on the other hand, acquired his reputation very slowly over long periods of time by behaving exceptionally well every day. He designed the reputation he wanted and cultivated it through the consistent delivery of the promises he and his company made.

In Berkshire’s case, they’ve become the premier institution to sell your business to if you desire to keep intact the culture and autonomy the owners have inculcated over a lifetime. The thoroughbreds of management can confidently join the Berkshire family without bureaucratic and disciplinarian rule. They expect to be compensated for meritocratic output because Warren and Charlie clearly communicate these principles and consistently live by them. A culture and reputation built by design.

It’s worked out quite well for them considering Warren started out as a seven-year-old reading investment books from his local library. At the end of 2014, Berkshire boasted a 21.6% compounded annualized gain in per share market value for the past 50 years ($1,000 compounded at 21.6% over a 50 year period would be worth $17,647,319.43), a $300+ billion market capitalization, as well as a world-wide respect and admiration for its ethical and enlightened business practices.

Hence, get the best reputation you can.

If you’re wondering what the top two best pieces of business advice I ever received are, the second-best is from my late mentor Jay Conrad Levinson (the man who coined and globalized the term “Guerrilla Marketing”). When I asked about his work with entrepreneurs like Steve Jobs and Bill Gates regarding what made them different, he resolutely replied “they didn’t do it for the money.”

However, the best business advice I ever received is from my father, Henry Wang. As long as we’ve been in business together and fortunate enough to serve hundreds of thousands of customers, he always emphasizes the essential need to “do business honestly and be different.”

That’s advice you can take to the bank.

Follow me for periodic updates, lessons, and musings on enterprise and entrepreneurial development by visiting https://medium.com/@b_wang