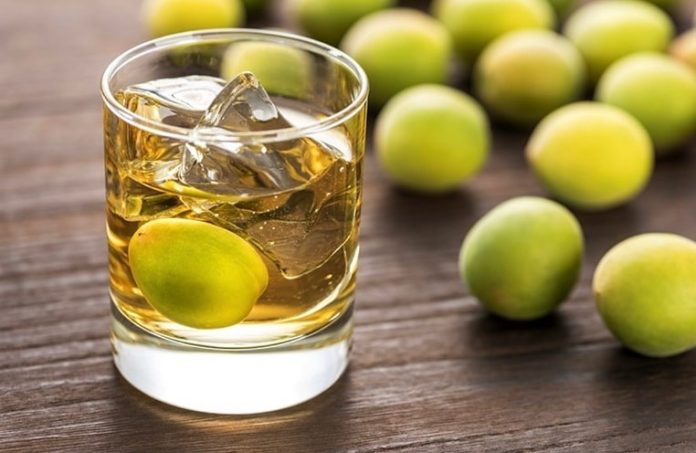 “Ume” (Japanese plums or apricots) is a common and nutritious fruit in Japan. Traditionally, it has been stocked as an emergency food. Though originally sweet, this fruit can be prepared in ways which make it either incredibly sour or downright saccharine. “Umeboshi” are “ume” which are salted, treated and pickled in red perilla or “aka shiso” and then dried out. The resulting “umeboshi” are extremely sour but have a health benefit of producing the beneficial parotin protein. They are usually enjoyed as a snack with a tea, put inside of “onigiri”(riceballs) or as part of a set meal. A sweeter way to use “ume” is to turn it into “umeshu” or plum spirits. “Umeshu” requires adding the plums to a container with sugar and spirits and letting it mature into a proper plum infused drink. Interestingly, the name of the rainy months during which “umeshu” is made is comprised of characters pronounced “Tsuyu” meaning plum rain. Overall, this tasty fruit has several health benefits however one enjoys it.

Japan cultures and foods article brought to you by Consulate General Japan in Miami.