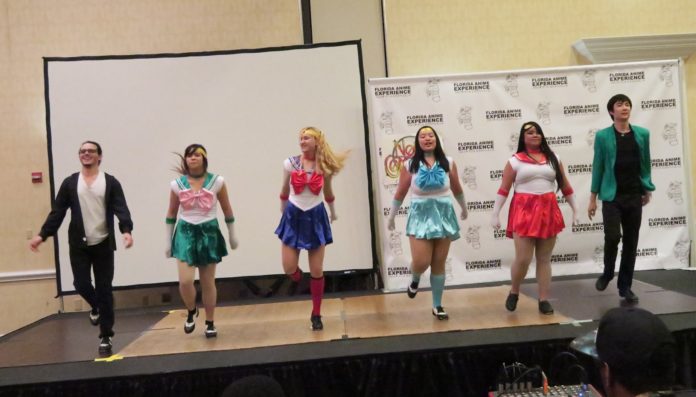 The annual Florida Anime Experience (FAE) in Kissimmee was quite a great experience this year. It was 3 day event filled with seminars, vendors and artists from all over. While a smaller convention compared to one like Megacon, it has set itself apart by creating a community of its own and also emphasizing respect for Japan and Japanese culture as a whole.

This was actually one of the reasons Asia Trend/Y.E.S.S. got involved. We had a booth set up to collect words of encouragement for the Kumamoto earthquake survivors. Tom Croom, the FAE convention director, made every arrangement to accommodate us and even offered to put us in the main lobby. We chose not to go there because it might somber the mood, but his and FAE’s commitment to respecting the culture and people of Japan was easily apparent. With that said, there was no shortage of anime celebration either. There were, of course, some great cosplays and amazing costumes all around. There were artists from all around, some local as well.  There was a video game room with both retro and newer Japanese games, and a manga library as well. Lastly, the vendors sold almost anything you can imagine anime or Japanese related.

The seminars, themselves, were quite varied. From anime panel discussions to cosplay competitions to more broadly Japanese-based exhibitions on Origami, Bonsai trees, Toyama Ryu (a Japanese sword style) and Judo (for example). There was also a “Love Live!” concert and, one of the big attractions, a Maid Cafe. There was also another seminar, related to the latter, explaining what Maid Cafes are about and their growing popularity in the U.S..

More than anything, I think what’s special is tight-knitted, yet friendly and open community that the Florida Anime Experience has developed. With some of its unique attractions, it’s gotten a cult following that’s also extremely welcoming. This was my first time attending but it didn’t take long for me to feel at ease with its casual but spirited atmosphere. I’m also very grateful to how many attendees came to our table to offer words of encouragement to the Kumamoto earthquake survivors. We were extremely well received and it said a lot about FAE’s following that they took the time to think of others in Japan while at a convention. I look forward to attending next year.