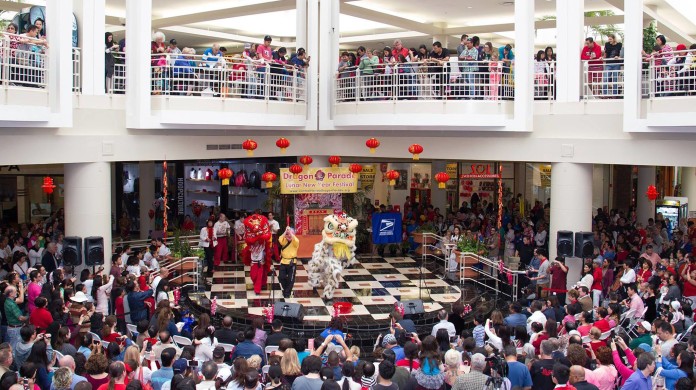 For those interested in enriching themselves by immersing themselves in the culture, art, and history of another, look no further than events like The Lunar New Year Festival and Dragon Parade. Events such as this one are a fantastic way to promote unity and celebrate diversity between cultures by celebrating all that makes us unique and acknowledging our heritage and that of others. The Dragon Parade itself was a colorful and enriching multicultural event. With free admission and a wealth of vendors, performers, and representation of more than 8 East Asian cultures, my experience was educational and immersive as I experienced art, food, dancing, martial arts, games, and language first-hand. The Lunar New Year (or Chinese New Year) is arguably the largest, most important holiday in East Asian culture. Japanese, Chinese, Indonesian, Vietnamese, Filipino, North and South Korean, and Thai cultures come together to celebrate a new beginning, ushering in the new year with festivities, dancing, food, and music of all sorts that represent their diverse and rich cultures. The Dragon Parade took place on the road surrounding the Orlando Fashion Square Mall, with performances and vendors inside the mall. 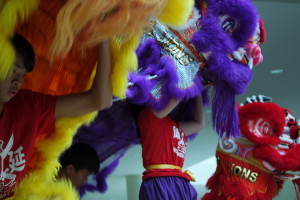 I had a prime spot at the middle of the parade route to fully enjoy each passing float or group of representatives from various local Asian cultural organizations. Ranging from dragon dancers, carrying poles attached to a vibrant fabric dragon, to martial arts dojos, to dancers and Miss Vietnam beauty queens, the parade incorporated a wide range of performers to ring in the new year. As this year is the Year of the Monkey, according to the Lunar calendar, many performances incorporated a person traditionally dressed as a mischievous Monkey in a papier-mâché mask and qipao (Chinese clothing with a high collar and a form-fitting shirt and pants) who would dance from person to person in the crowd, spreading good luck and putting smiles on faces. The monkey imagery continued throughout the parade as multiple other performers incorporated the symbol into their dances, music, or simply their clothing. The parade concluded with a performance from the Orlando Taiko Dojo. Taiko is a form of Japanese music that mainly consists of drumming, but will often incorporate bells, gongs, and other rhythm instruments, each song composed of different beat patterns and varying drum pitches. The end of the parade ushered in the beginning of the indoor performances as the focus shifted from outside of the mall to the main stage area inside. 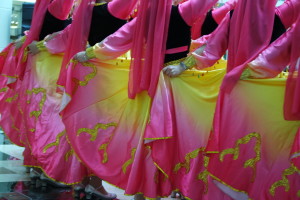 The stage performances lasted for more than 5 hours as over 180 total performers took the stage, both in groups and as individuals, to impart different aspects of each unique culture to the audience. Everything from martial arts demonstrations, traditional and modern dances, to live music were the main aspects of the performances. Local dojos from all across Orange and Osceola County demonstrated a wide variety of martial arts techniques, ranging from beginner-level choreographed routines to more expert-level kobudo, weapons training. A little girl no older than five or six, sporting a bright blue gi and yellow belt, mimicked a prowling tiger in her routine, while later a middle-aged man did a complex demonstration of fighting technique using a heavy broad axe. There was an abundance of both traditional and modern dances as well. The traditional Filipino Tinikling dance used large bamboo poles rhythmically slid and slapped on the stage floor as dancers hopped in a lively manner between the poles, a dance evocative of the movements of American double-dutch jump rope. Veiled ladies in vibrant pink and yellow dresses represented Indonesia in a traditional slow and graceful line dance, while the winner and court of the Miss Vietnam pageant put a modern twist on a traditional Vietnamese hat dance. Perhaps the most traditional of all dances is the Lion Dance, performed at every Lunar New Year celebration and a connecting element spanning multiple cultures. Beginning with an “eye dotting” ceremony, a prestigious figure from local society (in this case the CEO of the Orlando Fashion Square Mall, the event host and one of its sponsors) is given a paint brush and paints on the irises of the lion’s eyes, thus christening the new lion and “waking up” the spirit that lives within it. In both the parade and the stage performances, teams of dancers donned a massive lion costume – the 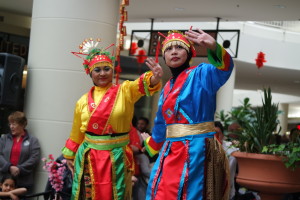 resulting feat using the dancers’ own legs to represent the lion’s legs while the dancer in front also manipulates the lion’s eye and mouth movements. The dances take skill and coordination, and the illusion is one many children at the show delighted in as the enormous, fluffy lions (often mistaken for dragons) leapt about.

Aside from the taiko performance that kicked off the event, the other musical performances included a small string orchestra from local school of music, A Gift For Music, performing Chinese classical compositions. Performances from students also included solos and accompaniment on traditional Chinese instruments such as the erhu, a two-string fiddle played similarly to a violin with a bow, and konghou, an ancient Chinese harp played by strumming the strings with your fingers. 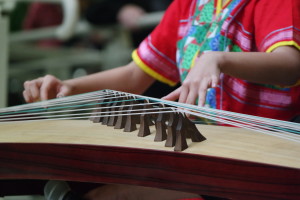 There was a plethora of vendors at the event, selling anything and everything from traditional clothing like kimonos, fans, toys, and trinkets – but the most memorable of course was the food. Ranging from modernized sushi and hibachi restaurants to Korean barbecue food trucks, to the more traditional style curries, rice and dumplings, there was a wide variety to sample from. Of the food I tried, my favorite had to be the boba milk tea. A modern treat with its origins in 1980s Taiwan, boba or bubble tea is usually milk based and available in just about any flavor you can think of. The boba part of the tea comes from large tapioca pearls, soft and chewy, squishy and sweet, that sit at the bottom of your drink and give you something to munch on as you drink your tea. The flavor I had was taro, a root that lends a purple color and earthy, semi-sweet taste comparable to chocolate. In addition to my boba, I sampled traditional pork and chicken gyoza dumplings as well as a modern take on sushi from a restaurant called SusHi, where they turn the concept of sushi rolls inside-out and allow you to build your own custom rice bowl with as many toppings and fillings as you please. The event concluded with one last lion dance before closing with well-wishes for all patrons and event attendees for the new year. 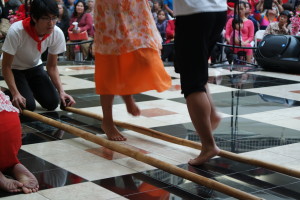 After immersing myself in such a whirlwind event for the day, I left with a new perspective of the art and traditions of 8 cultures I didn’t know much about beforehand. The heritage event was very well-attended and offered a unique and somewhat rare experience. I was left with the impression that simply reading about world cultures in a textbook or online, though enriching, can only go so far as to demonstrating what life is really like within these cultures. To fully appreciate and retain all you learn, immersing yourself in a setting where you can watch beautiful dances, listen to traditional-style music, and eat delicious food is integral. Learning by firsthand experience opened my eyes to the world that exists beyond the realm of my little hometown, beyond my state, and far past the reaches of my own country. Coming from a Hispanic culture setting where the food is always plentiful and the gatherings raucous and joyful, the traditional art, food, clothing, and dances of my culture always telling the story of my people and their past, I realized that we are not so different from one another. I surprised myself by trying new things and as a result I find that I have a new perspective because of it. Looking through the photographs I took at the event and the memories associated with each dance, each song, each demonstration, I know I will want to keep learning about other cultures and what is out there in the world beyond my four walls. 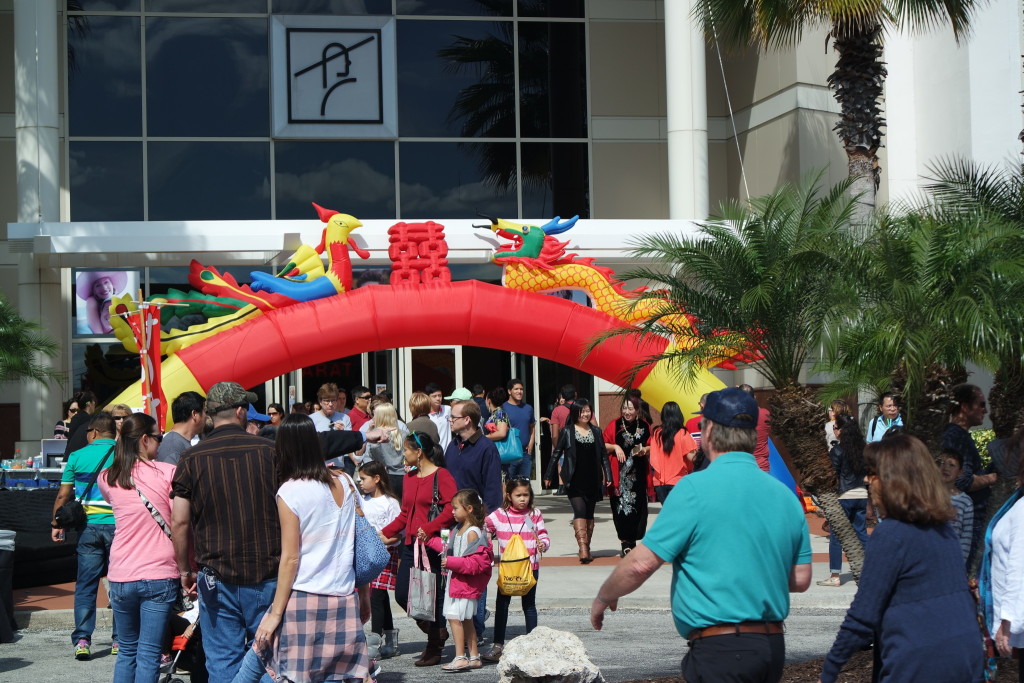 If you have missed this event in February, you are given another chance to learn these eight different cultures on May 7.  Asian Cultural Festival organized by Asian American Heritage Council will take place again inside the Orlando Fashion Square Mall starting 11am.  Visit http://www.aahc-cf.org for more details.

Giselle Parks is a student, blogger, freelance photographer, and writer. She has studied creative writing at her performing arts high school and enjoys reading, traveling, and learning about the world around her through firsthand experience. Though not her first cultural event, it was her first time attending the Lunar New Year festival this year and as a result Giselle wishes to study abroad in the coming semesters in college.