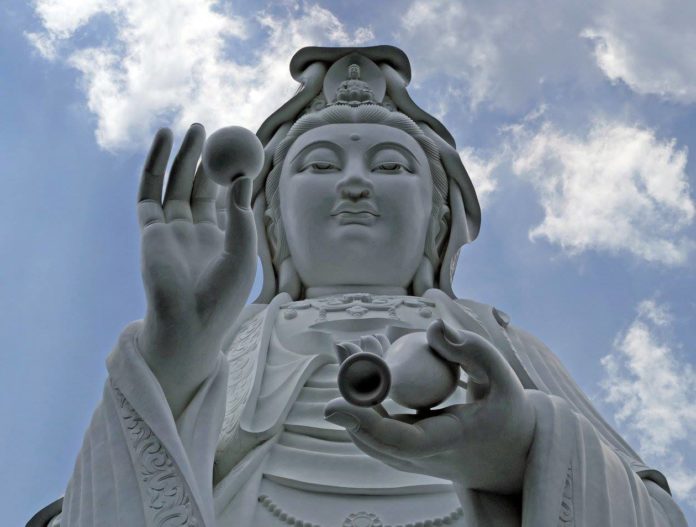 Tsz Shan Monastery (Chinese: 慈山寺) is a large Buddhist temple located in Tung Tsz, Tai Po District, Hong Kong. As a Chinese Buddhist monastery established for the inheritance of the teaching of the Buddha, Tsz Shan Monastery is a sanctuary for the purpose of spiritual purification, and endeavours to open the door to compassion and wisdom for the public through various activities. Much of the monastery building funds were donated by local business magnate Li Ka-shing. Within the Tsz Shan Monastery, an outdoor bronze Guanyin statue, 76 meters in height, is the second highest in the world. Tsz Temple completed its construction and opened to public visitors in April 2015, led by the Venerable Kok Kwong HHCKLA. The general public is required to make an appointment through phone or internet beforehand for a visit the Tsz Shan Monastery. The daily quota for visitors is limited to 400 at initial stage. During the test run only visitation requests from local non-profit organizations, registered charities, and funded welfare agencies will be accepted. Opening hours for public visits are 9:30am to 5pm daily. The 500,000 square-foot Tang dynasty-style monastery is a non-profit making complex which promotes Buddhism to the general public as well as allowing followers to reflect. The steel-framed bronze forged white statue of Guan Yin holding a pearl in her right hand is 76-metres tall, more than double the height of the “Big Buddha” on Lantau Island and sits on a 6-metre podium. It is the world’s tallest bronze and second tallest Guan Yin statue. The HK$1.5 billion development also includes a Grand Buddha Hall, Universal Hall Great Vow Hall, lecture hall, bell tower, drum tower, the Bodhi tree and the Buddhist Pine, landscaped gardens and courts, meditation path, “Brilliance Pond”, covered walkways and canteen. About 60% of the site is green space with flowers, lawns and trees.

The statue of Guan Yin holding a pearl in her right hand is over twice as tall as the “Big Buddha” on Lantau Island.